We have been talking a lot this semester about Actors themselves screwing up characters roles, because we associate them with other characters from other films. Well Sadly that happened to me this week with Dustin Hoffman playing as Bernstein in All the President’s Men. I find it strange that this hasn’t happened before in this semester, but I have my reasons. And they are as follows:

Mel Gibson– Quite frankly I can’t take anything Mel Gibson does seriously. I feel like all his roles are so extreme that I always am bothered by that and not the actor.

Matthew Broderick– (Don’t Judge!) I actually have never seen Ferris Bueller, so I really had no idea who he was.

Tom Cruise– Well. For me he is forgettable. I have seen many Tom Cruise movies but afterwards I never really remember what he did or anything about his characters personality. Even now I have to admit I am kind of forgetting random details from Born on the Fourth July. He has never impressed me as an actor. There is not one thing that stands out about him. Except that I can’t think of anything exceptional about him.

So why did I have problems with Dustin Hoffman? Well for one thing it is hard to replace this image:

I guess it must be the age difference. It is admitably more weird to see someone 35 years younger for the first time, than older. However, it isn’t just Meet the Fockers (though I find the image hilarious) it seems that whenever he is in a movie I recall other movies he has been in. In that sense he is more memorable than Tom Cruise. However this only lasted for the first 15 min or so of the movie, by that time I accepted that he was Bernstein and not Dustin Hoffman. And there were really only a couple of instances where I thought of his other roles. And only once did I remember he was a Red Panda! ^_^ 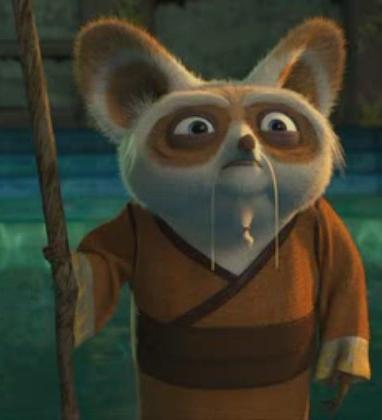 Finally I know these aren’t the “classic” Dustin Hoffman movies, they were just the ones I could think of that were really far off from All the President’s Men.

I was catching up with a friend who is going to school in Colorado the other day and she asked me how classes were going and such. I told her I was watching Matewan for class, a movie about the Matewan Massacre in West Virginia. She then made the comment that they had massacres like that in Colorado too. So I decided to look up what I can find, and I found two that really stood out. The first one being the famous Ludlow Massacre in 1914, and the second was the Columbine Massacre in 1927.

What struck me about these massacre was the influence that the big companies had over the US, the Rockefeller’s weren’t just in West Virginia they were clearly in Colorado too! The oppression that the miners experienced didn’t come from just one area, it was the nation as a whole. I found it interesting so I though it would be good to share…

So I made a discovery the other day, one that I think would be useful for other people’s projects too, which why I am mentioning it. The first discovery was one that really carries over from last semester, its a handy plugin called FD Footnotes. For citing this made things so much easier, it is already included in umwblog’s plugin database so there doesn’t have to be any special downloading. Here is the website if you want more info.

Also, I stumbled across this fantastic duo by the name of Siskel and Ebert, they reviewed a lot of films from the 1970′s up until the mid 1990′s. If you are doing a film that was released during that time it wouldn’t hurt to YouTube it because they touch on what is important in American culture at the time it was produced. AKA- Primary Source!

So this song has been stuck in my head now for the past 2 days (thanks Dr. McClurken) and have been singing it spontaneously, much to the annoyance of one of my friends. At one such moment a friend asked where the song was from and I told him it was from My Darling Clementine. The Response? My Darling who? I told him it was a Western that was filmed in 1946, and he then exclaimed that was 64 years ago! That is almost forgotten! I guess I can say I just realized how old this movie is… odd it never crossed my mind before. That also brings WWII a bit farther away because that means it began over 70 years ago. That is a lot of history.

First off, I just want to say that it is difficult finding sources for a movie you have never seen! Here are the first couple sources I have found which relate back to Forrest Gump:

Baker, Mark. NAM:The Vietnam War in the Words of the Men and Women who fought there. New York: William Morrow and Company, inc., 1981.

*This one is useful because I can actually get a perspective of what the war was like for those involved in it, not just the political figures, but from the soldiers themselves.

Charlton, Michael, and Anthony Moncrieff. Many Reasons Why: The American Involvement in Vietnam. New York: Hill and Wang, 1978.

*This one focuses on why the US became involved in Vietnam, it brings forth a couple of interviews with Nixon. However the entire book relates back to the radio programs written in 1977 by Michael Charlton.

*This one I though would be useful because the movie does continue after the war and apparently he becomes romantically tied with someone, so gaining an understanding of the effect the war might have had on Veterans psychologically would be useful for analysis.

*I thought this one would be interesting to look through not only because it is focused on Vietnam, but because it is published by the Army. I figure that would give me more of a mindset of the Armies’ reaction to the war.

*Apparently in the movie there was a Hurricane, and this was Hurricane Carmen, I though it would be useful to to look up the actual hurricane and compare it to the movie later on. For example, how powerful was it, where did it strike and so on….

Because I know everyone is dying to know where that cliff is, I decided to do a little bit of research (meaning google) to see what I come up with.

Exhibit A: A Screenshot of the Cliff, with the Glade plug-in moment

Exhibit B: The Waterfall that looks uncannily similar 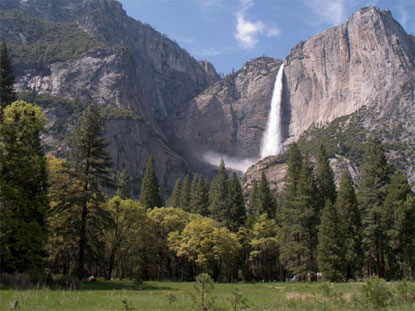 Now the second waterfall is actually Yosemite Falls, which is located in California. Now, I may not be a geography major but I happen to know that California is actually located on the opposite coast, so I guess we could add this to the list of inaccuracies. Deeply amusing as it is….

Though today what really stood out for me was how we could use Pocahontas as a primary source for examining important issues of the mid 1990′s. One of those issues raised was that of the environment. I feel like for us, there has always been this association that Native Americans are deeply connected to Mother Nature and care for it, whereas the white man does not. Not only is this explicitly pointed out in the movie, but it is also seen in other aspects of our culture. Just this past month I came across a National Geographic article about Native Americans bringing ”back land crushed over generations of human use.” (yes its a direct quote) This is implying that all our problems today are really the problems of the white man, and it is the job of the “Noble Indian” to fix them…

I have decided to just continue using my old blog and just add in a new category for this class. Ummm for the test post I guess I can mention my name is Jenn. I have taken classes with Dr. McClurken before and somewhat understand the crazy technology so I am willing to help people.